Samuel Taylor Rayburn (centre) is announced as the winner of the UM Government Law Student Association’s inaugural political competition at the November 2 meeting of the Oxford Board of Aldermen. Photo submitted

GLSA was founded last spring as a space for law students interested in pursuing legal careers in government or public service.

“GLSA’s Political Competition Committee has worked very hard over the summer to create something unique and impactful for our student body,” said Founder and Co-Director Teresa Jones.

The competition provided students with an interactive opportunity to express their views and shape policy through academic research and writing, public speaking, and coalition building. .

“We are so proud of our unique political contest,” said Susan Duncan, dean of the school. “At UM law, our mission is to ensure that all students are well equipped for their legal careers, and we are proud of GLSA’s plans to strengthen the skills of our students in government law.

Second-year law student Samuel Taylor Rayburn of Oxford took first place at the end of the event. Rayburn said he participated because he wanted the learning experience of prescription writing.

“Working through the process of finding the best way to write a prescription was something that I thought would be a valuable learning experience on how to solve legal writing problems, and in the end, it was. “said Rayburn.

“I felt like I learned a lot about writing things in an enforceable way that I can not only use in the future if I’m able to write a prescription or something similar, but are very applicable to drafting contracts and useful in this area.”

During the competition process, Rayburn learned of many issues that he hadn’t considered before, ranging from wording the language of the order so that it was clear and unambiguous to ensuring that it can be implemented and enforced in a reasonable and cost-effective manner, he mentioned.

GLSA was recognized by Oxford Mayor Robyn Tannehill at the November 2 meeting of the Council of Aldermen, where she announced Rayburn as the winner.

“I spend a lot of time on my prescription, from researching to writing and editing to preparing for a speech on the floor,” he said. “Winning was validation that my hard work paid off and a nice boost of confidence as I head into the final month of the semester and finals.” 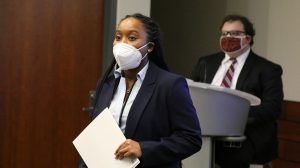 Teresa Jones, founder and co-director of the Government Law Students Association at the law school, introduces the contestants for the association’s inaugural political competition on Oct. 29. Photo by Christina Steube/School of Law

Competitors were given a sample issue with two weeks to research and write a municipal ordinance for or against an open container law. After completing the written portion, contestants gave a speech in support of their policy to a panel of judges.

“My favorite part of the competition was the lobby day portion because it feels like a real-world approach to solving problems,” Jones said. “For the lobby day, competitors had to pitch their policies to other law student organizations.

“This has had the effect of pushing contestants to use innovative approaches in order to gain support from conservative and progressive groups on campus.”

The GLSA was created by a team of students from both sides of the political aisle, and it intentionally has two co-directors so that conservative and liberal viewpoints are adequately represented. The organization remains active throughout the academic year by hosting guest speakers and workshops for its members.

SACRAMENTO, Calif., August 23, 2022 /PRNewswire/ — The California Lawyers Association (CLA) is proud to announce the names of the attorneys, judges and legal organizations who will be recognized for their outstanding contributions to the legal profession in California. Recipients will be recognized at the CLA Annual Meeting Opening Reception at the Hilton San Diego […]